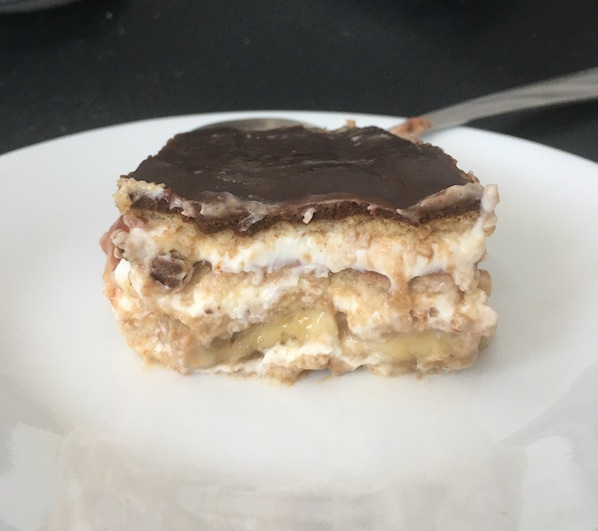 Made some Estonian Cookie Cake! Not the prettiest, but one of my favorite desserts to make. I learned the recipe in France while studying abroad from an Estonian friend, and have since made it many times because it’s so easy and tasty, and relatively healthy as far as desserts go. As it doesn’t involve any baking, I even got to share it with a lady in India who wanted to make a cake for her daughter’s birthday, but didn’t have an oven in their house!

Here it is as a whole: 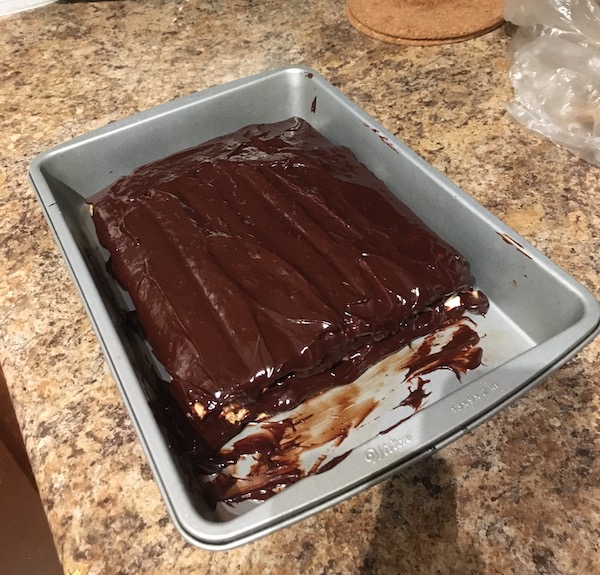 The procedure is pretty similar to tiramisu but not as fancy / particular in ingredients you use. Ingredients are super flexible and quantities are not fussy! You can replace just about anything you’d like in it. In the India case just about everything was changed but it was still just as delicious.

I used semi-sweet chocolate chips and I found it not too sweet, which is great. Makes it feel healthier. And using oat milk / water made it closer to being vegan. That didn’t seem to affect the taste.

Since I didn’t have any other use for sour cream at home, I used the whole tub in this. We found it to be too much sour cream. It could also have been because I only made three layers, so the sour cream layers were very thick. Might have been better spread out.

Ideally I’d find a vegan replacement for sour cream as well so that it becomes fully vegan. Need to research that.

Next time I also want to try not dipping the bottom layer so that it stays crunchy. The flavor does taste cheesecake-like, would be interesting to see if this would make it similar to the cheesecake crust.